Do you know the vicinity of Mariánské Lázně? Part 1: Kladská

Just under 9 km to the north of Mariánské Lázně you can find one of the most beautiful places in the Cheb district: Kladská lake and hunting mansion, which are located in the centre of the most precious area of the Slavkovský Forest nature conservation area. 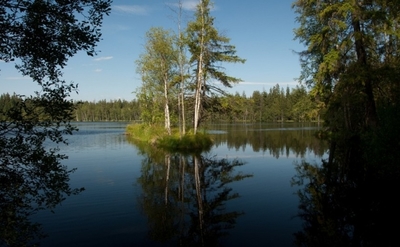 You can enjoy a newly renovated natural trail leading through the Kladská Peats national nature reserve called Tajga which prides itself on very varied fauna and flora. The trail of wooden footway starts at the former hunting mansion of the Prince of Schönburg-Waldenburg and takes you through peaceful spruce forests and around a romantic body of water.

You might as well take a look at a nearby Kyselé (Acid) Lake with one of the most acid basin in Europe, and a park with the tomb of the founder of the local hunting mansion, which includes styled buildings and an arboretum.

You can reach Kladská on foot, by bicycle, bus or car.

If you belong to nature lovers, you may be first of all attracted by an impressive golden Norway spruce, which forms a dominant feature of the beginning of the trail. The tree is not really tall but in relation to its height it owns a very mighty and wide branching, which reaches as low as the ground. Following the wooden footpath you will get to primary forests style covers, which will accompany you for the rest of the nature trail. The European silver fir, which used to be the most abundant tree, occurs only sporadically today. However, you can see here the Scottish and Norway maples, creeping pine, grey silver fir, the above mentioned golden Norway spruce, beeches and other woody plants. 308 years ago you could also meet here a bear; the last one was shot in 1698. In 1708, the common lynx was shot out and the last wolf was hunted in 1756.

Due to the change of the environment, the return to the original plant and animal composition is not possible. Today, the animals that occur in the area are the black grouse, woodgrouse, foxes, red deer, the red crossbill or the Eurasian pygmy owl. You can also see the moorland clouded yellow and if you are lucky, you might come across the hunting spider, which resides directly in the peat bog, where it constructs its dwellings in the form of reinforced tubes. The area is as well suitable for carnivorous plants, such as the round-leaved sundew and the butterworts.

The landscape around Kladská is divided into three parts: 133-hectare Tajga, 93-hectare Paterák and 43-hectare Lysina. The walk around the nature trail itself will not take you long but if you want to make your trip longer and enjoy the vicinity, you will definitely spend a very pleasant half-day here. Take a walk to the tomb of the prince, who used to love this place so much, that he wanted to be buried here and rests in peace in the nearby area of Lysina. Or you may visit one of the local pubs or restaurants where you can among others savour game dishes.